How else does male and female sexuality differ?

Another fundamental difference between men and women — perhaps the most important defining difference — is that in the male brain, physical and psychological arousal are united. If a man is physically turned on, he’s mentally turned on too.

With women, physical arousal and mental arousal are separate. [Research finds that women get physically aroused sometimes even when they find the situation disgusting.] The female brain is designed to be cautious, most likely because historically the woman who slept with the first guy she met might have a harder time raising children; he might not stick around. Women are designed to be cautious and gather more information.


That’s why fan fiction is all about exploring the emotions and character of the hero. In romance novels, the heroine learns about the secret inner life of the hero. That’s especially true in slash: that’s doubling up. There are two men — two masculine, strong alpha males who reveal their tender side. The emotional process of revealing true character is what’s so appealing to women.

Why would straight men want to watch lesbians, and why would women write stories about gay men?

Straight guys are turn on by lesbians because it’s a doubling of visual cues. And one psychological cue for arousal in men is female sexual pleasure. Seeing lesbians kissing doubles that too.For women in slash fiction, it’s the psychological cues of a man’s character, stature, passion and emotional communication — slash doubles those.

2) Love is a state in which a man sees things most decidedly as they are not.

4) You have your way. I have my way. As for the right way, the correct way, and the only way, it does not exist.

5) Judge a man by his questions rather than by his answers.

6) I cannot believe in a God who wants to be praised all the time.

7) I'm not upset that you lied to me, I'm upset that from now on I can't believe you.

8) The true man wants two things: danger and play. For that reason he wants woman, as the most dangerous plaything.

9) It is not a lack of love, but a lack of friendship that makes unhappy marriages.

11) He who cannot lie does not know what the truth is.

12) Whatever is done for love always occurs beyond good and evil.


Most of them are by German Philosopher "Friedrich Nietzsche" Here is his photo! :) 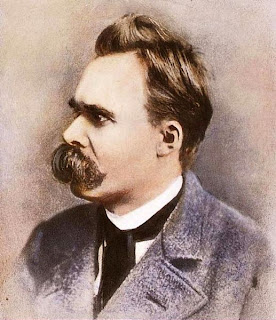 “The number of Twitter followers I had in relation to how many people in the world know about me was woefully inadequate,” he said. So in June he bought a small city’s worth for $424.15, raising his Twitter follower count from about 700 to more than 220,000.
“There’s a tremendous cachet associated with having a large number,” said Mr. Nainan, 31, adding later, “When people see that you have that many followers, they’re like: ‘Oh, my goodness, this guy is popular. I might want to book him.’ ”
It may be the worst-kept secret in the Twittersphere. That friend who brags about having 1,000, even 100,000 Twitter followers may not have earned them through hard work and social networking; he may have simply bought them on the black market.
And it’s not just ego-driven blogger types. Celebrities, politicians, start-ups, aspiring rock stars, reality show hopefuls — anyone who might benefit from having a larger social media footprint — are known to have bought large blocks of Twitter followers.
The practice is surprisingly easy. A Google search for “buy Twitter followers” turns up dozens of Web sites like USocial.net, InterTwitter.com, and FanMeNow.com that sell Twitter followers by the thousands (and often Facebook likes and YouTube views). At BuyTwitterFollow.com, for example, users simply enter their Twitter handle and credit card number and, with a few clicks, see the ranks of their followers swell in three to four days.
Will Mitchell, the founder of Clear Presence Media, a marketing company outside Tampa, Fla., said that he has bought more than a million followers for his clients, which include musicians, start-ups and a well-known actress he declined to identify.
“And it’s so cheap, too,” he said. In one instance, Mr. Mitchell said, he bought 250,000 for $2,500, or a penny each.
One site, Fiverr, an online classified for cheap marketing services, has several ads offering 1,000 Twitter followers for $5.
Heddi Cundle, founder of MyTab.co, a San Francisco company that helps people raise money for trips, spent $5 on Fiverr to buy 200 followers last October, when her site started. By the next month, “we had about 1,100 to 1,200 people on both Twitter and Facebook, which was amazing,” she said. “We needed that to get ourselves going.”
Fake Twitter followers briefly made the news in July, when Mitt Romney’s Twitter following jumped by more than 100,000 in one weekend — a much faster rate than usual. A flurry of news reports purported to expose the practice of buying followers. “Romney Twitter account gets upsurge in fake followers, but from where?” read a headline on the NBC News Technolog blog.” (The Romney campaign has denied it bought followers.) Similar claims were lobbed at Newt Gingrich last year; his campaign also denied that he paid for any of his 1.3 million-strong Twitter following.
Having fake followers, it is important to note, does not necessarily mean that they were purchased. Unlike Facebook friends, Twitter does not require users to approve followers. In other words, anyone can follow you on Twitter, whether it’s your mother or a spammer.
Twitter followers are sold in two ways: “Targeted” followers, as they are known in the industry, are harvested using software that seeks out Twitter users with similar interests and follows them, betting that many will return the favor. “Generated” followers are from Twitter accounts that are either inactive or created by spamming computers — often referred to as “bots.”
Buyers and sellers see nothing wrong with it. “Buying followers generated by bots is against Twitter’s terms and frowned upon by the public,” Mr. Mitchell said. “However, it is perfectly legal.”
The practice has become so widespread that StatusPeople, a social media management company in London, released a Web tool last month called the Fake Follower Check that it says can ascertain how many fake followers you and your friends have.
The tool examines Twitter relationships, said Rob Waller, a founder of StatusPeople. “Fake accounts tend to follow a lot of people but have few followers,” he said. “We then combine that with a few other metrics to confirm the account is fake.”
If accurate, the number of fake followers out there is surprising. According to the StatusPeople tool, 71 percent of Lady Gaga’s nearly 29 million followers are “fake” or “inactive.” So are 70 percent of President Obama’s nearly 19 million followers.
But Twitter is starting to clamp down. In April, it filed suit in federal court in San Francisco against five spammers, including those who create fake Twitter followers. (The case is pending.) That didn’t discourage Mr. Nainan, the comedian. He recently asked about “the theoretical maximum” Twitter followers he can purchase.
“They said, ‘You could probably get over a million, a million and a half,’ ” he said. “And I’m like, ‘Why not? I can afford it.’ ”

QUOTE OF THE DAY!

It is our nature: Human beings like success but they hate successful people.